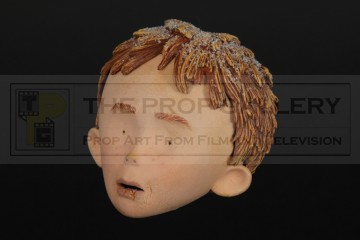 This is an original production used stop motion animation puppet head skin for the lead character of James portrayed and voiced by Paul Terry. The puppet skin is constructed from foam in two parts and is finished to a extraordinarily high standard with this example being scene specific featuring frost to the hair and evidence of it being attached to a puppet under skull during filming.

The head measures approximately 3.5" and remains in very good production used condition with only minor hardening to the lips and lacking a small piece of hair to the fringe, generally very fine.

An instantly recognisable and highly displayable artefact from this well received stop motion picture which requires no introduction.