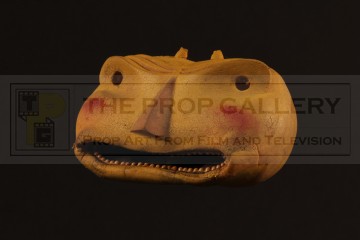 This is an original head skin used on the stop motion animation puppet used in bringing to life the character of Mr. Centipede, the cigar smoking show off voiced by Academy Award winner Richard Dreyfuss. The head skin is constructed from foam rubber with a yellow paint finish and features holes for the eyes with his trademark pointy nose and a large mouth filled with teeth. To the top of the head is a slit where it was removed from the stop motion puppet skull following its use in the production and to the underside a small square hole allowing access to the mounting point used to attach the skull to the puppet body.

The head skin measures approximately 3.75" wide and remains in remarkable condition still being supple and soft to the touch with some minor wear to the mouth area including a small split to the interior, generally very fine.