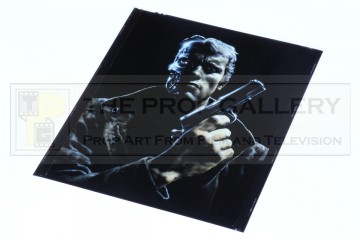 An original transparency from the production of The Terminator, the 1984 science fiction action classic starring Arnold Schwarzenegger under the direction of James Cameron.

This is an original 8" x 10" studio transparency on Kodak positive film which was created during the production of the movie and shows the famous conceptual artwork painted by director James Cameron depicting Arnold Schwarzenegger as The Terminator. This exact artwork was used on some early promotional material for the movie and also clearly inspired the artwork used on the UK Quad poster executed by Mike Francis. In addition to this Arnold Schwarzenegger has stated that following a meeting between the pair James Cameron sent him a copy of this artwork with his likeness as The Terminator and that it became a deciding factor in him being cast in the now iconic role.

An extremely rare and highly displayable artefact from this critically acclaimed blockbuster and classic of the science fiction genre.