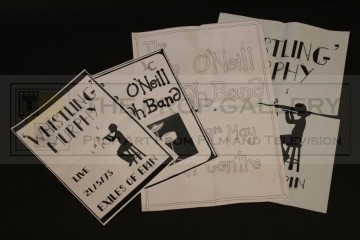 A collection of original posters from in the production of Life on Mars, the hit television drama series starring John Simm and Philip Glenister.

Posters such as these can be seen used outside the Irish club in the third episode of season two. The posters depict adverts for Irish bands, Whistling Murphy and The Joe O'Neill Ceiliah Band which are playing at the club. There are two posters for each act in both A3 and A2 sizes making four in total, the A2 size being accomplished using 2 A3 posters to join together.

Given that the posters were pasted to the walls and were not removable, at least not in one piece, these are not screen used but are backups created by the production which were ultimately surplus to requirements.

The posters in good condition with a light fold to the middle of each and represent displayable artefacts from this very well received and multi award winning series.