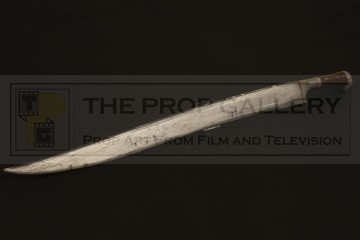 An original prop used in the production of the 1984 picture Indiana Jones and the Temple of Doom, the second instalment in the popular Indy franchise.

Weapons such as this can be seen used by the Thuggee cult, notably in the scene were they attack Indiana Jones (Harrison Ford) before the memorable rope bridge sequence. The machete is constructed entirely from fibreglass and features a painted brown handle with a metallic silver blade to intended to simulate metal.

The machete measures approximately 31.5" long the weapon exhibits numerous chips to the blade and paint wear consistent with heavy use during the production.

A rare and highly displayable artefact from one of the most highly regarded and iconic franchises in cinematic history.