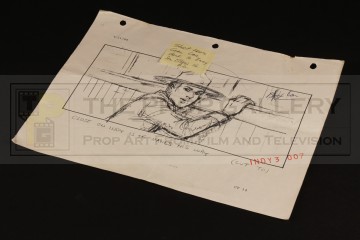 The storyboard is from the memorable train chase sequence at the beginning of the movie and depicts the shot where the young Indy (River Phoenix) clambers along the circus train as he attempts to escape with the Cross of Coronado while pursued by Fedora and his gang. The storyboard features a scene description below, the date 4/11/88 and the production stamp 'INDY3 007' in red, it hails from the personal collection of second unit director Michael Moore and is annotated in his hand on a self adhesive yellow paper which is applied the the storyboard and hand inscribed in pen with a further note 'BOX CAR' inscribed to the storyboard itself.

A very fine example of an original storyboard from one of the biggest franchises in cinematic history.