TARDIS or Time and Relative Dimension in Space is the time machine and spacecraft used by The Doctor in the long running BBC science fiction television series Doctor Who. Despite being fitted with a ‘chameleon circuit’ enabling the craft to change its form in order to blend in with its surroundings the design of the TARDIS has not changed since it first graced our screens in 1963, taking the form of a 1960s police telephone box. This image of the blue police box has since become a mainstay in British popular culture and is recognised by millions of people across the world as the TARDIS, a term which was successfully trademarked by the BBC despite opposition from the Metropolitan Police.

The TARDIS was realised on screen by a combination of full size props used for live action filming and model miniatures for visual effects shots of the TARDIS in flight. This filming miniature was built for use in the 1968 serial The Mind Robber starring Patrick Troughton by an effects team led by Jack Kine and Bernard Wilkie, the founding fathers of the BBC Visual Effects Department. This miniature was created specifically for the memorable cliffhanger at the end of the first episode where the TARDIS explodes, this visual effects model sequence was filmed at Ealing Studios on Monday 10 June 1968. The scene where the TARDIS reforms at the climax of the serial is the same model sequence played in reverse. The previous owner of the prop recalls being taken to the model shoot as a boy by relative and BBC effects technician Bob Slatford, he remembers being aware at the time that the footage was being shot for use in the end title sequence.

It seems likely that the effect of the TARDIS breaking apart was possibly realised by a technique known as an elasticated explosion where the panels would have been held together under tension with elastic and a small charge detonated to sever the links resulting in the prop flying apart, this method is known to have been utilised by Bernard Wilkie and is documented in his book The Technique of Special Effects in Television. Despite the footage having been flipped owing to way it was filmed the miniature is easily identifiable as it contains a number of unique features which can be conclusively screen matched to the model sequence. The most noticeable of these features is the base section with a hook in the middle, every detail of which can be matched on screen despite it having been repainted. Also clearly visible is the interior detailing on one of the door panels which we see break away, a damaged corner on the roof section and a damaged lower window section leaving absolutely no doubt that this is the exact miniature used in the filming of this sequence.

Constructed mainly from plywood this miniature was built with the breakaway shot in mind with the base and roof of the model being completely detachable. The interior features various detail which would not ordinarily be required on other miniatures, there are also hooks to the interior to enable the effects technicians to rig various panels on wires for the shot. After the shot was completed the sections of the TARDIS were gathered by an effects technician and rebuilt, fortunately very limited damage had occurred to the miniature during the shoot. When the TARDIS was initially acquired by The Prop Gallery it was clear that the exterior had been repainted to a gloss blue finish with black base and roof which was certainly not original to the prop although the interior had fared better and still features its original finish with the exception of the base panel. 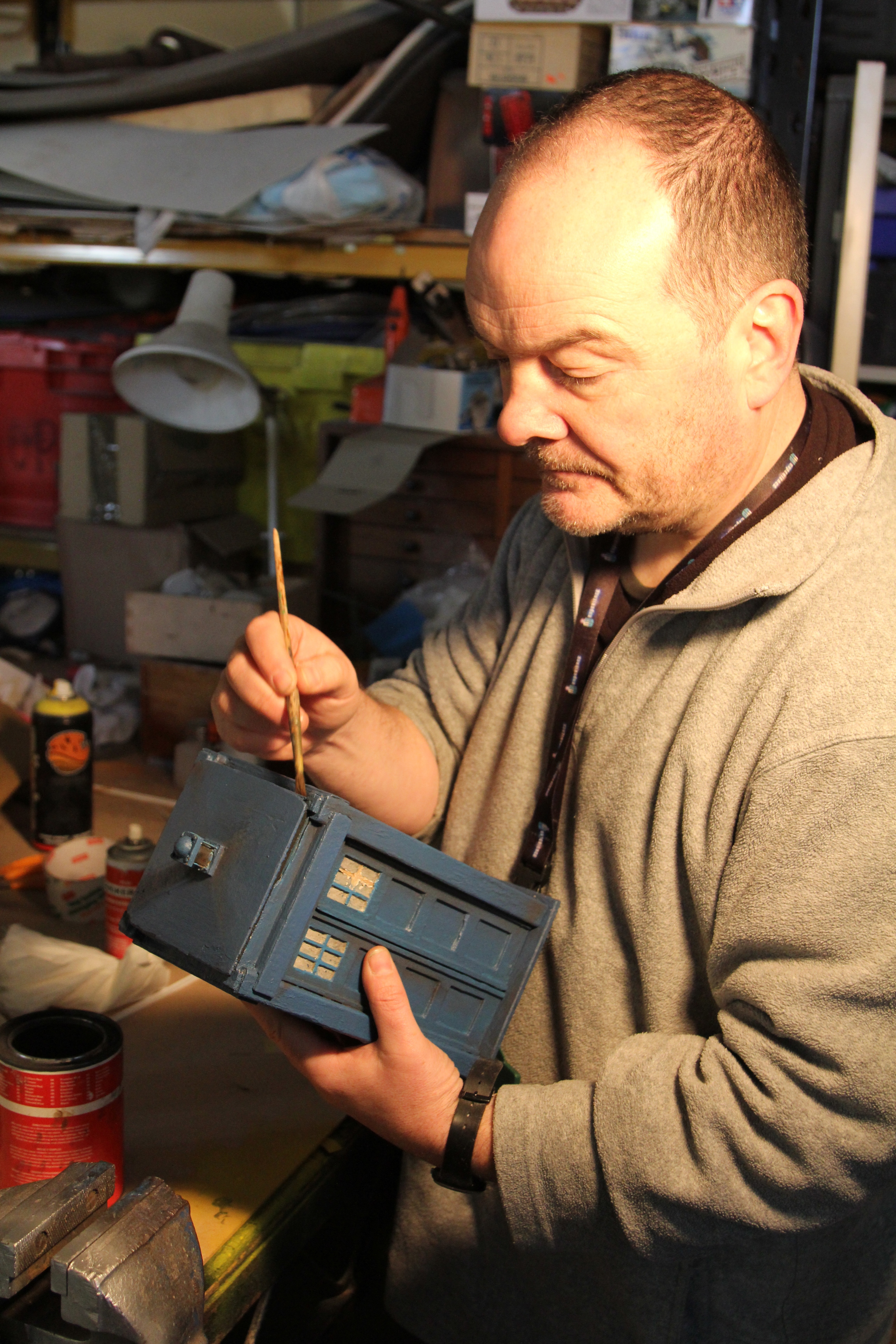 Due to the fact that the main body of the TARDIS had been painted the incorrect shade of blue and the roof and base in black the miniature looked wrong, also the blue paint was of a gloss finish rather than the matte finish it would have been originally in 1968. As it was so obvious, even to an untrained eye, that the paintwork was not original to the miniature it was decided that a sympathetic restoration would be beneficial to return the piece to its former glory. The obvious choice to carry out this work was former BBC Visual Effects Department veteran and Model Unit supervisor Mike Tucker who had contributed to a number of Doctor Who serials in the 1980s and had built some of the original TARDIS miniatures used on screen at this time.

The initial consideration was to attempt to remove the gloss paint although closer analysis showed that the plywood base of the miniature had been coated in a plaster like substance to give it texture and while removing the paint there was a danger of removing the plaster coating which being an original element to miniature was unacceptable. With this in mind it was decided that the best course of action was to repaint the exterior of the prop using the original interior as a sample to attain the correct colour, this was achieved by simply brush painting the model by hand with the correct shade of blue and adding dry brushed weathering. This restoration was not executed with exacting care but roughly and sympathetic to original BBC Visual Effects Department techniques. The partially broken window section was left untouched as some of this damage is clearly visible on screen and thus original to the production, the window panes also remain untouched and are believed to be original to the miniature.

Original artefacts from the very early years of the show are incredibly scarce with only a handful of significant pieces having survived over the course of 50 years, now returned to its former glory this represents an incredibly rare example of an original TARDIS filming miniature which can be guaranteed screen used and remains one of the truly iconic images from this classic science fiction series. 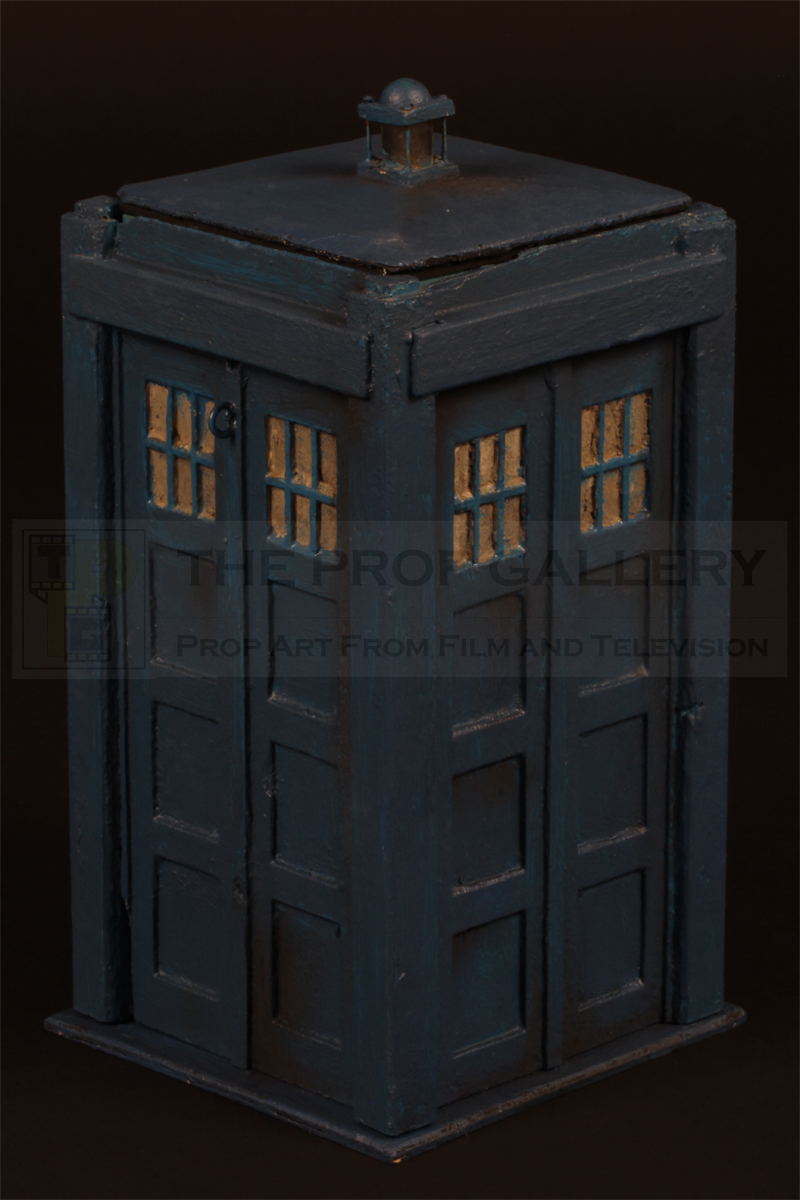 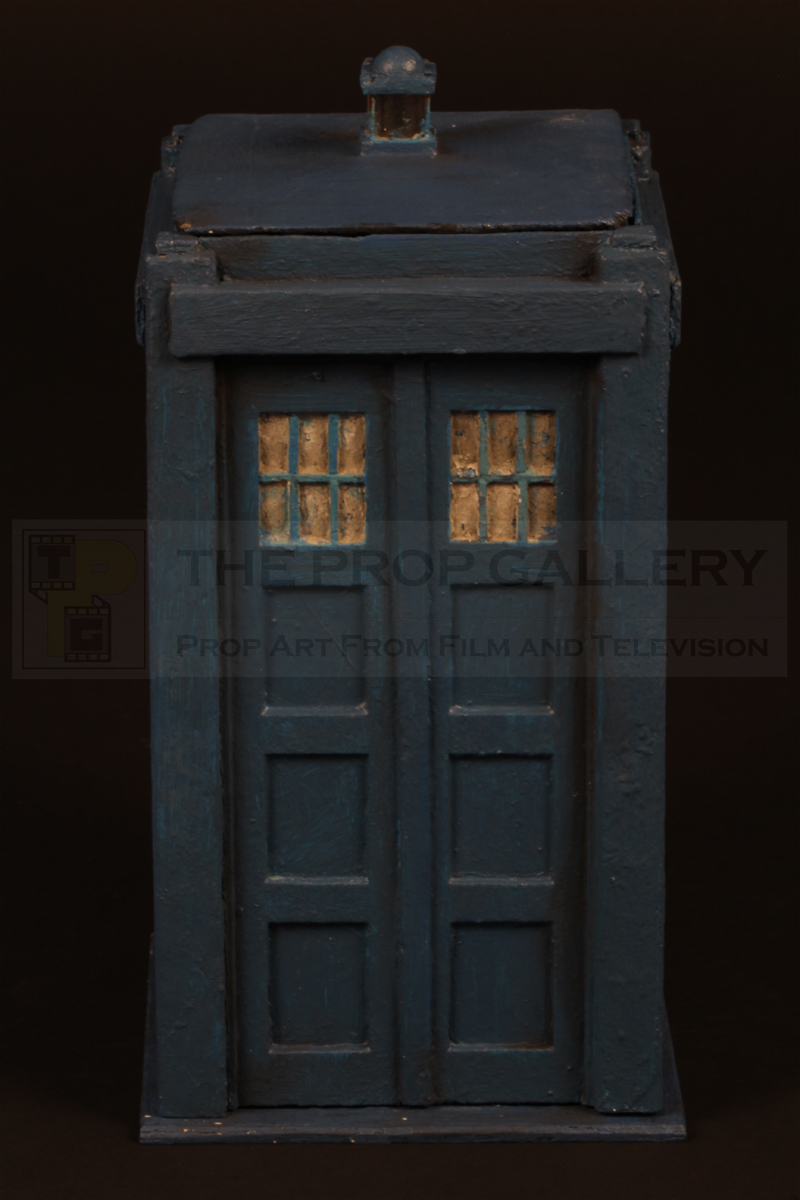 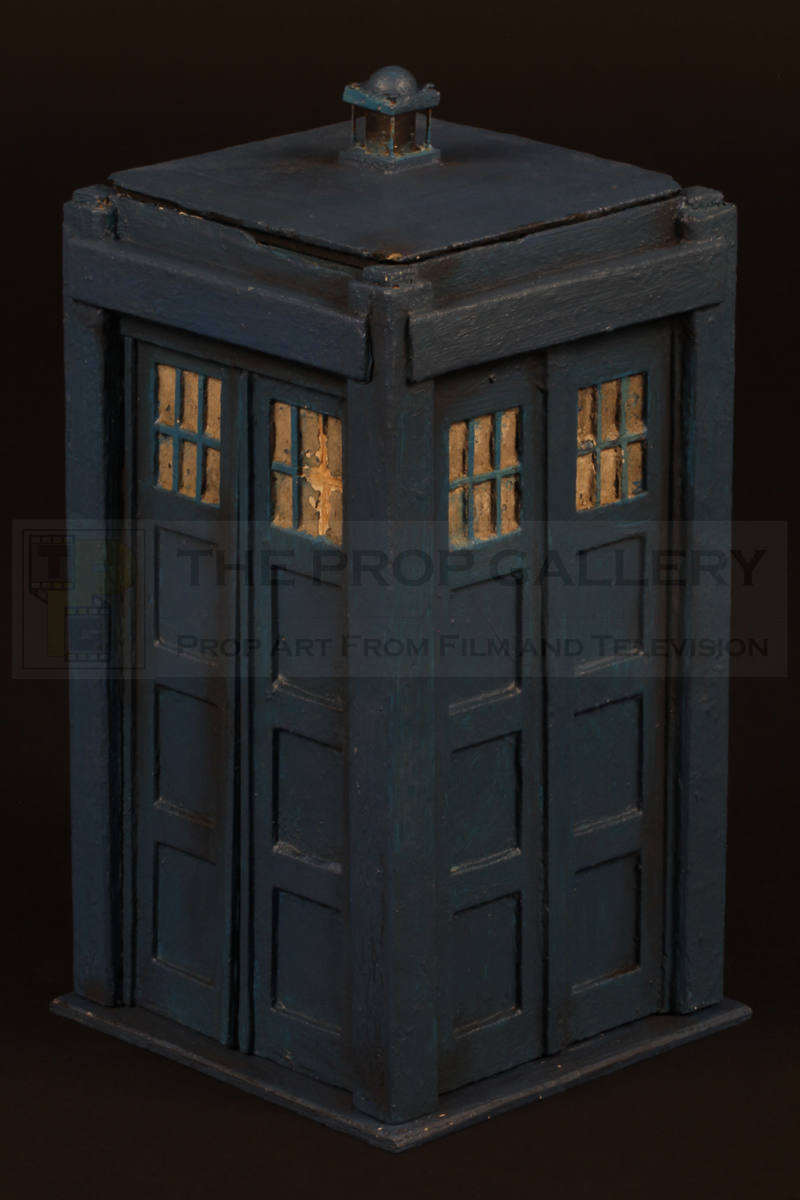 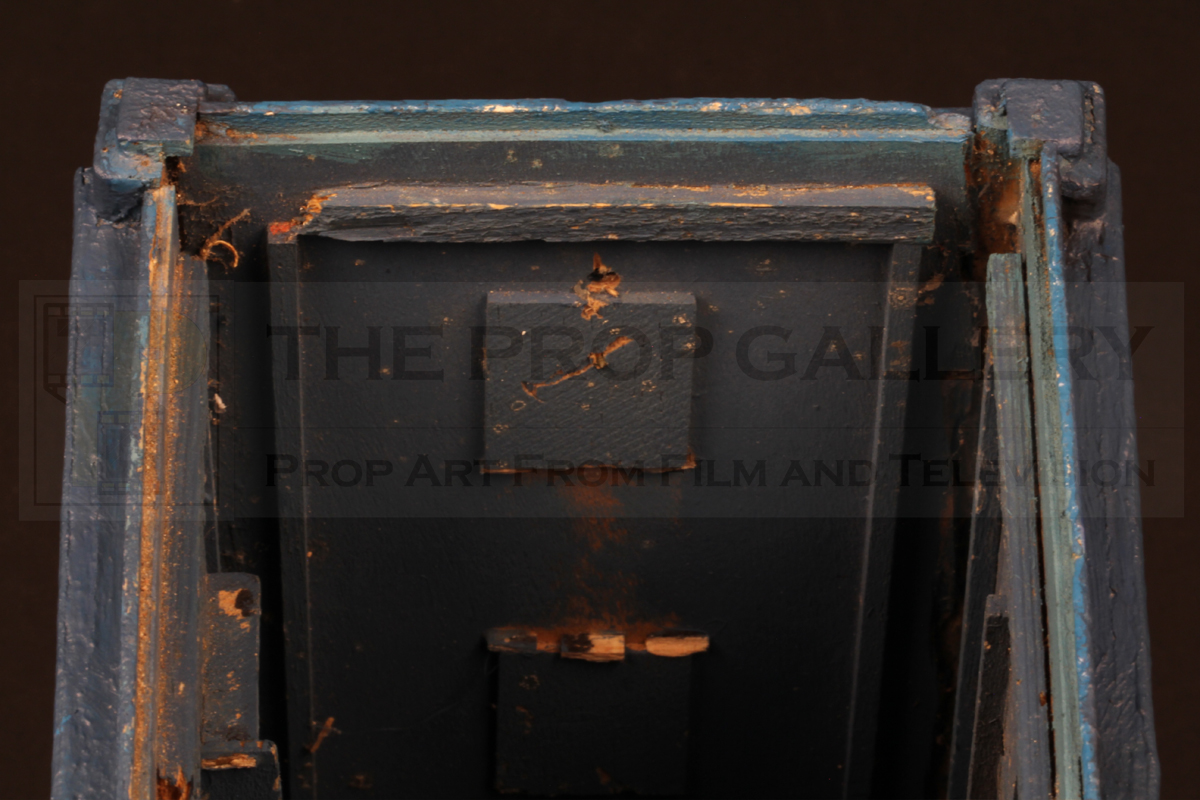 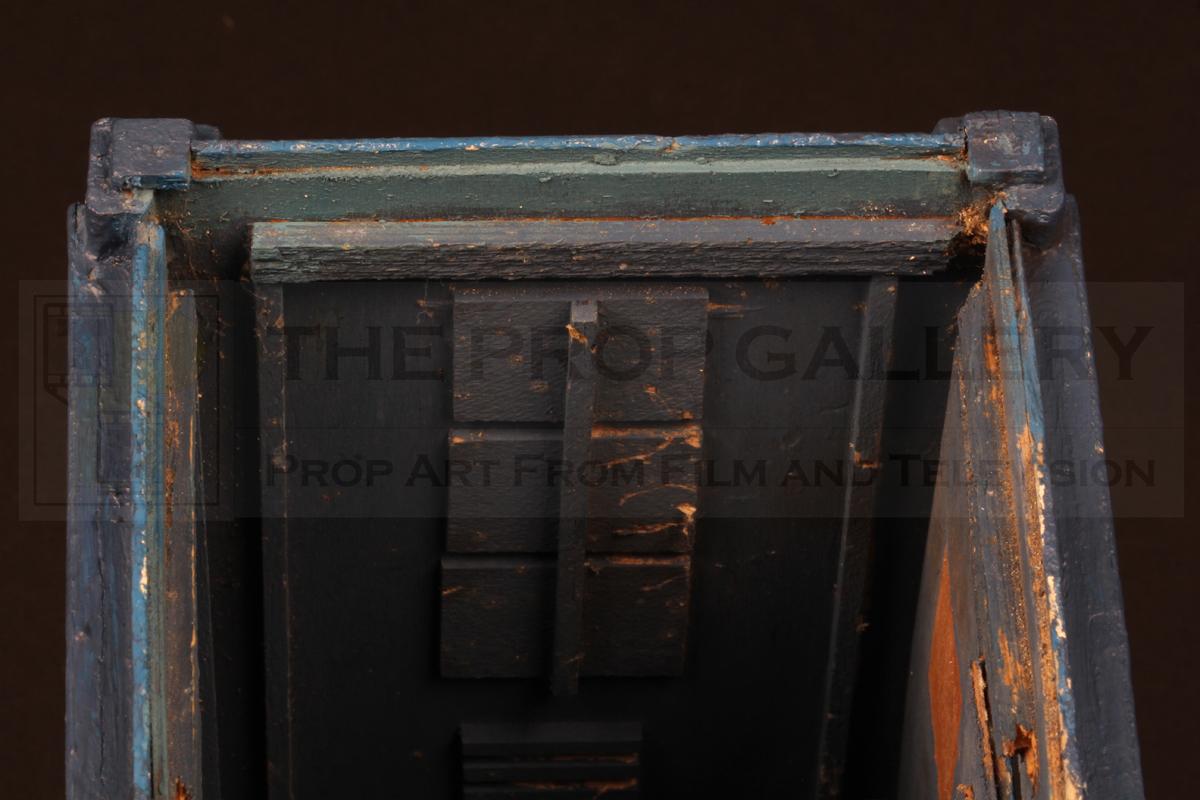 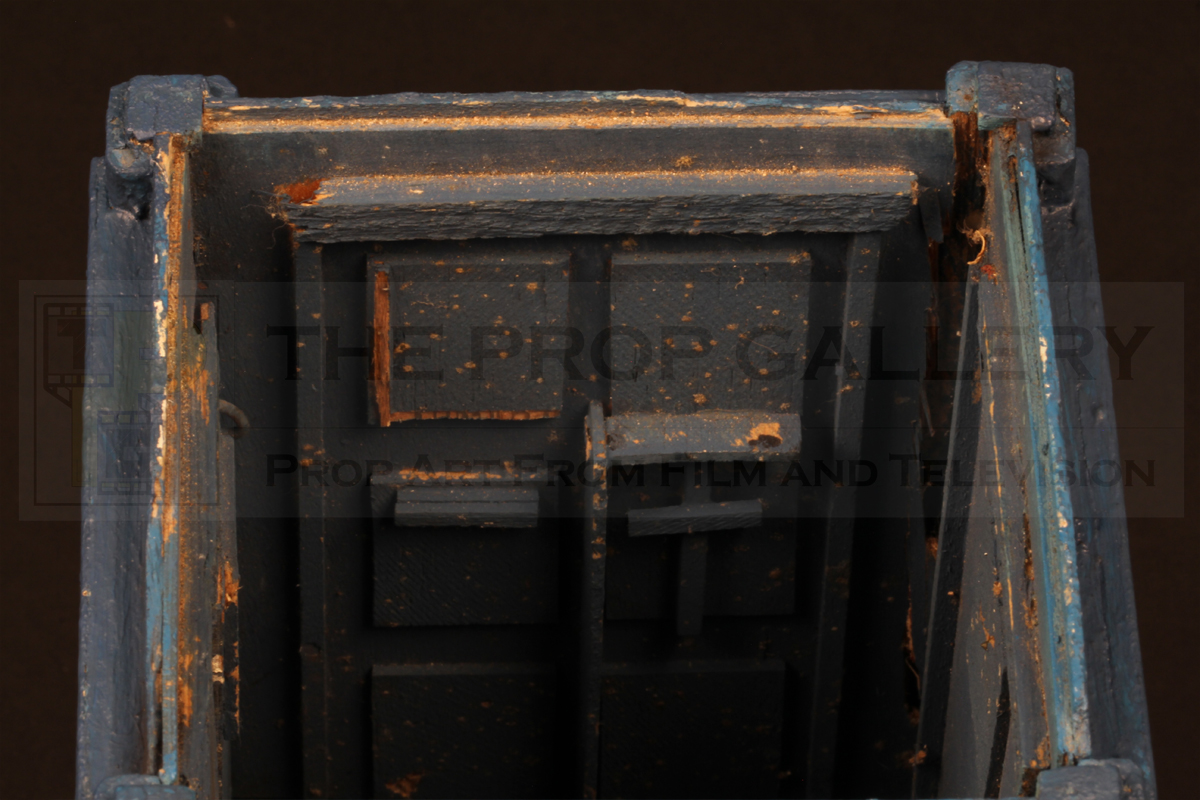 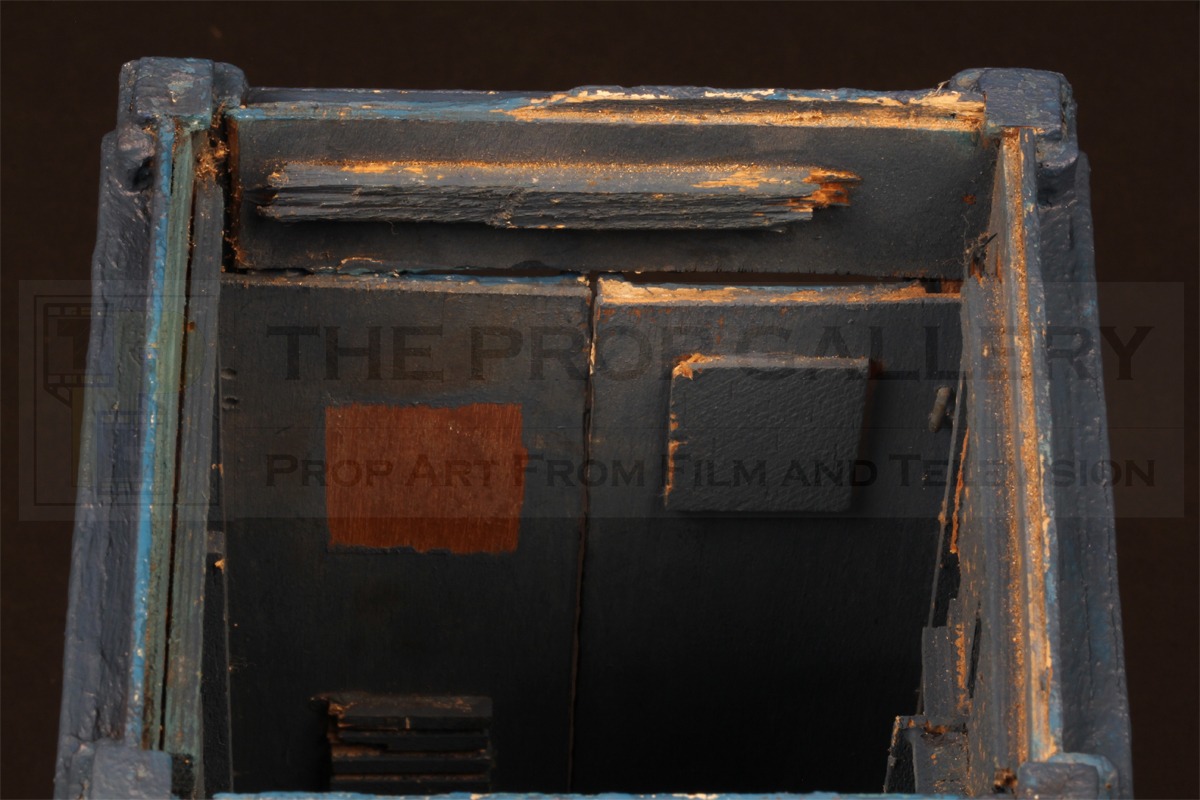 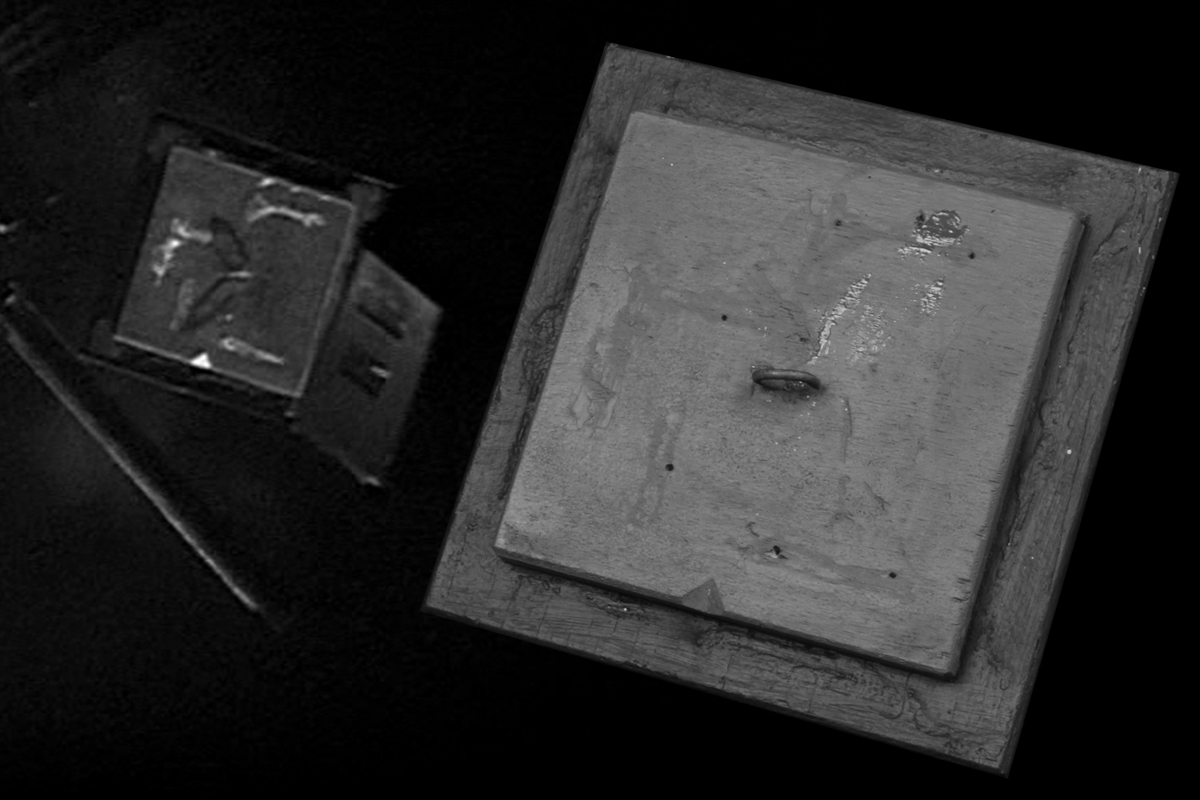 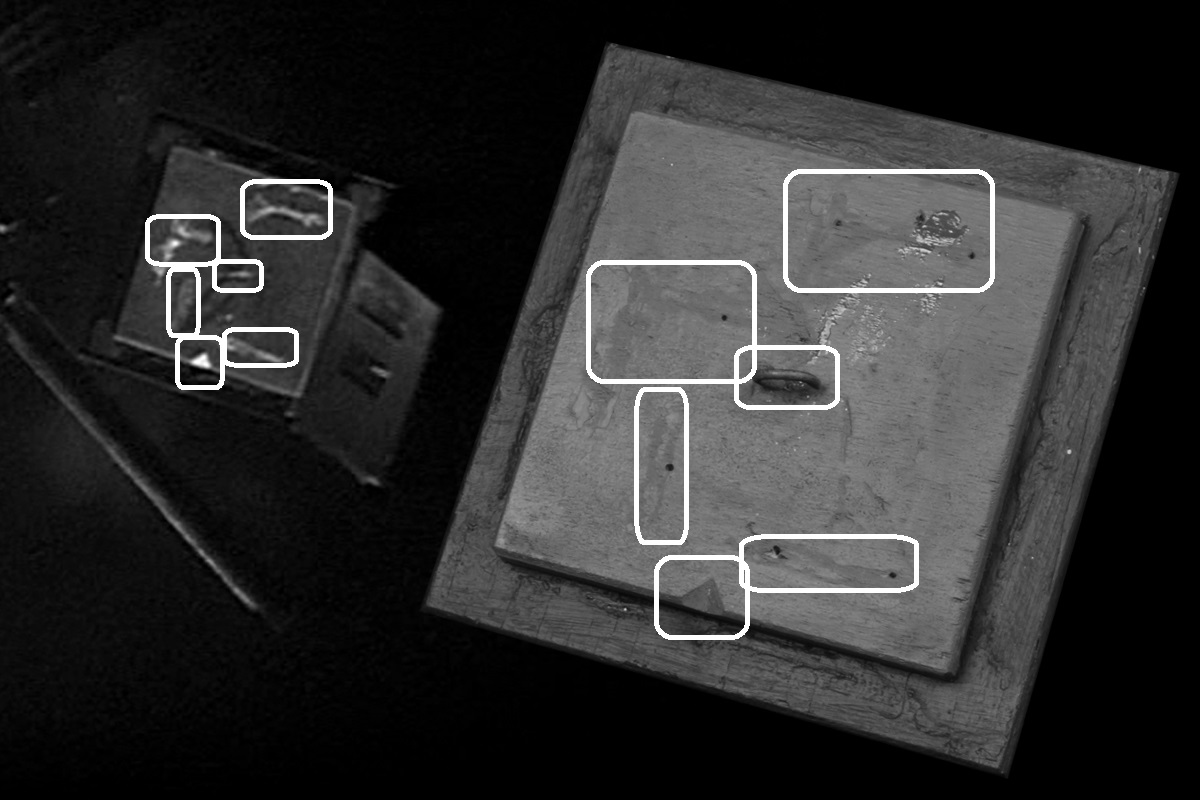 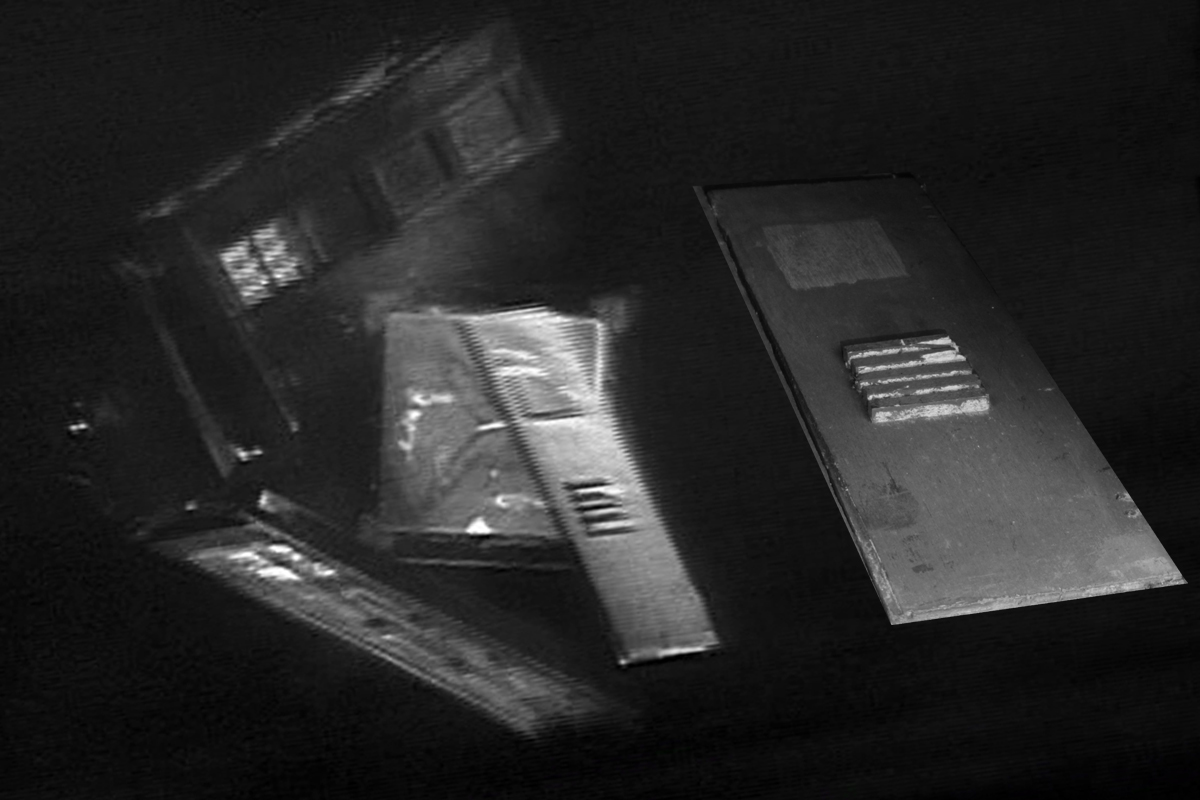 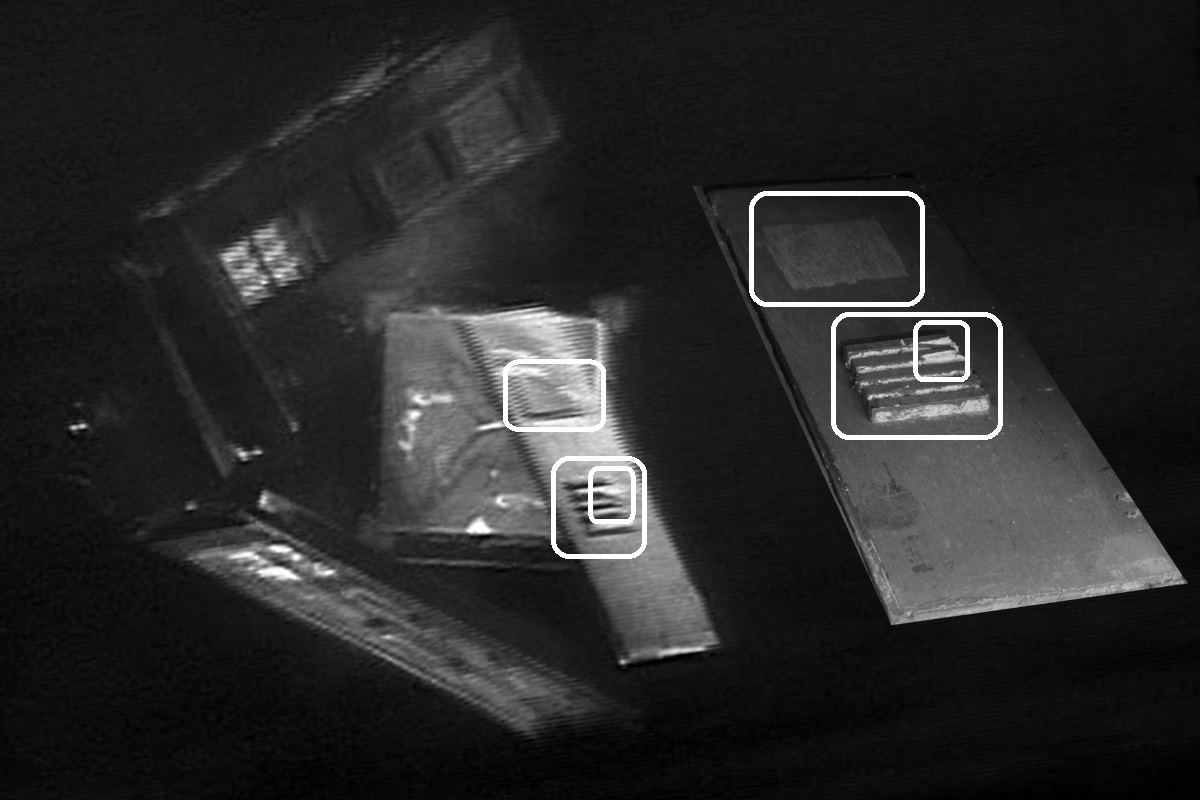