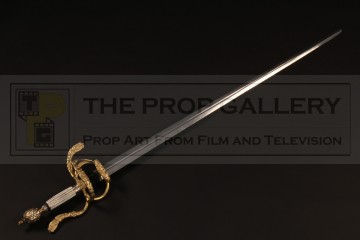 An original prop used in the production of Highlander, the 1986 fantasy picture starring Christopher Lambert, Sean Connery and Clancy Brown.

This sword was used on screen by stunt coordinator Peter Diamond as immortal Iman Fasil who is beheaded by Connor MacLeod (Christopher Lambert) following the car park duel which was choreographed by noted sword master Bob Anderson. The sword is then discovered to be a rare Toledo Salamanca by forensic pathologist Brenda Wyatt (Roxanne Hart) and is later seen at the police station.

The custom made rapier style sword is constructed from stainless steel with an intricately detailed guard and pommel of cast metal which features a number of faux gems, the imitation ivory grip is constructed from resin with a green velvet ricasso above. The sword can be conclusively screen matched to the shot where it is seen in close up on the bonnet of the car during the duel.

The weapon measures approximately 14" long and remains in excellent condition with some wear consistent with its use during filming and lacking several of the faux gems to the pommel.

An extraordinarily rare and likely unique artefact from the production of this highly regarded cult picture.