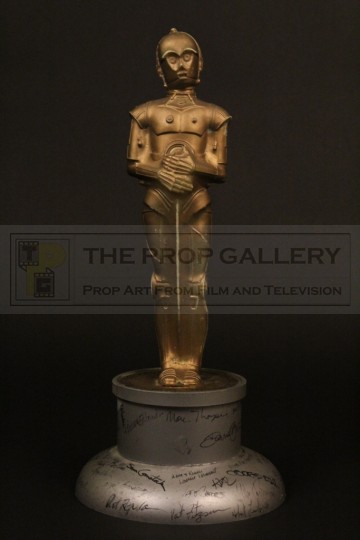 This Oscar statuette was created at Industrial Light & Magic and presented to visual effects unit supervisor Brian Johnson who was recruited into the ranks of ILM for The Empire Strikes Back after impressing George Lucas with his miniature effects on the 1975 Gerry Anderson television series Space: 1999.

The quality of the effects produced by ILM was recognised at the highest level on March 31, 1981 when a Special Achievement Academy Award was presented to Brian Johnson, Richard Edlund, Dennis Muren and Bruce Nicholson for exceptional contribution to visual effects.

This C-3PO Oscar statuette was created by Industrial Light and Magic and presented to Brian Johnson by chief model maker Lorne Peterson in commemoration of their achievement as Johnson planned to depart ILM and return to the United Kingdom. The C-3PO element of the statuette is a modified MPC model kit which has been altered by ILM to hold the crusaders sword and subsequently cast in resin, this is mounted on top of a custom made plastic base in a similar fashion to a genuine Oscar statuette with the finished article measuring almost the same height as a genuine Academy Award at 13.5". The top of the base where Threepio stands is inscribed in marker 'ILM 1981, IN APPRECIATION, BRIAN JOHNSON, THE EMPIRE STRIKES BACK' with the remainder of the base signed by numerous members of the miniature and optical effects unit, there are 42 signatures present which include

Similar more professionally finished C-3PO Oscar statuettes were later given out as long service awards by ILM but this was almost certainly the first and represents a wonderful tribute commemorating the efforts of one of the most gifted special and visual effects talents of his generation.

The C-3PO statuette remains in generally excellent condition with some minor paint wear and evidence of a repair where the feet of the statue had once become detached from the base.

The final three images show Brian Johnson with the C-3PO Oscar and it displayed alongside Brian's genuine Academy Award statuettes and BAFTA.

A unique a highly displayable artefact recognising the exceptional visual effects talent behind The Empire Strikes Back.