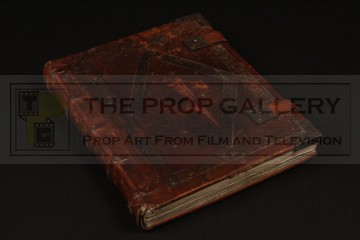 Name of the Rose (The)

An original manuscript used in the production of the 1986 medieval picture The Name of the Rose starring Sean Connery and Christian Slater.

This is one of the original illuminated manuscripts which were custom made by the props department for the production. Beautifully crafted with superb historical accuracy the prop is constructed from hard board which is covered with leather bearing a motif to the front cover which also features ornate corner protectors of metal with leather straps which locate on pins to secure it closed. The interior of the manuscript consists of a number of parchment like pages which have been intentionally distressed with water by the production to give an old appearance. The majority of these pages remain blank with twelve pages of content to the centre which consists of writing which is entirely hand inscribed, believed in Latin, and a number of hand drawn and painted illustrations decorated with gold as you would expect with an illuminated manuscript of the period and some printed imagery.

The manuscript measures approximately 13.5" x 11" with a thickness of around 2", it remains in excellent production used and intentionally distressed condition.

A fine example of prop making at the highest level this represents a highly displayable artefact from this well regarded production.