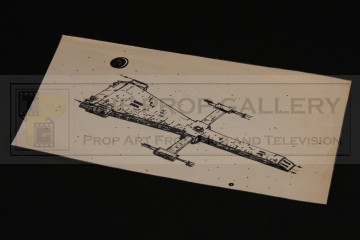 An original concept artwork used in the production of the BBC science fiction television series Blake's 7.

This is an early hand drawn concept artwork for the Liberator spacecraft created by BBC Visual Effects Department designer Ian Scoones during pre-production of the series. Accomplished in pen on paper with a planet above the ship and star background this concept differs significantly from the final design of the Liberator and was published in issue 296 of SFX Magazine.

The artwork measures approximately 8" x 4.5" and remains in excellent production used condition with some paper and glue residue to the verso having been removed from a scrapbook, generally fine.

A rare example of original concept artwork from this cult science fiction series.