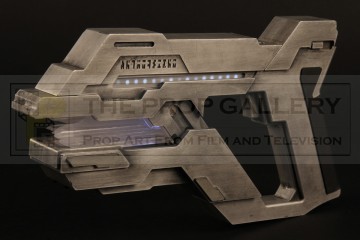 An original prop used in the production of Stargate Atlantis, the science fiction television series produced by MGM.

This stunner was custom made by the production and utilised by the Asuran in Seasons Three and Four of the series. Constructed from cast metal this highly detailed prop is a hero version intended for use in close up featuring a sliding cover revealing faux crystals which can be lit by a concealed switch to the body. The prop features ancient writing to both sides which translates to "neutraliser" with a rubber applique to the grip and remains in working condition when operated by the switch. The accompanying holster is constructed from brown leather and features a press stud fastening belt loop and an elastic holding strap.

The weapon and holster measure approximately 10" x 5.5" and remain in excellent condition exhibiting only minor surface wear from production use and handling, overall fine.

An exceptional piece of prop building and a highly displayable artefact from this well received science fiction franchise.