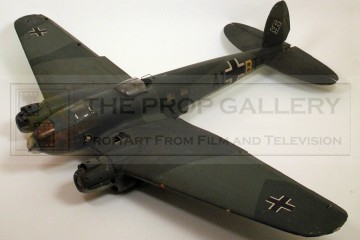 An original Heinkel bomber miniature from the production of Over Here, the 1996 BBC drama penned by John Sullivan.

This large scale Heinkel He 111 filming miniature is constructed from wood and started out life as a remote control model which was acquired by the BBC and modified for use on production. The bomber sports custom engine cowlings constructed in fibreglass by the BBC visual effects team lead by designer Andy Lazell, in addition to well detailed pilot, bombardier and waste gunner miniature figures and a custom paint job and decal detailing creating a highly detailed and realistic looking filming miniature with working ailerons, elevators and rudder, this was shot, alongside the Spitfire miniatures, on the model stage at BBC Western Avenue.

The Heinkel measures a very impressive 5 feet an length with a wingspan of 6' 8" and is in generally good screen used condition, sadly missing the propellers and with a small hole to the wing.

The Heinkel was subsequently reused in Red Dwarf in the series seven episode Stoke Me a Clipper in the memorable opening sequence, a James Bond parody which climaxes with Ace Rimmer riding the crocodile after departing this plane.