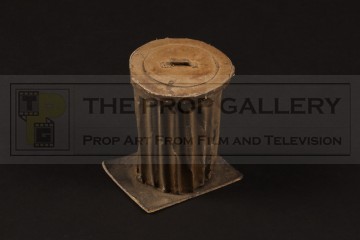 An original miniature used in the production of Hard Rain, the 1988 disaster thriller starring Morgan Freeman and Christian Slater.

This trash can miniature was produced by 4 Ward productions who handled special and visual effects on the movie and would have been used for the flooding sequences which were filmed in miniature. Constructed from cardboard the trash can is nicely detailed and has been spray painted and weathered with a dirtied silver finish, it stands on a base of card and measures approximately 2.5" high, this displayable and affordable miniature remains in good production used condition with some minor bumping to the corners of the base, otherwise fine.