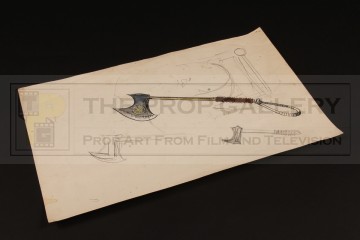 An original concept artwork used in the production of the long running BBC science fiction television series Doctor Who.

From the 1977 serial The Talons of Weng-Chiang this is the original conceptual artwork for axe which the Chinese assassin throws at The Doctor (Tom Baker before being killed by Leela (Louise Jameson). The artwork was created by BBC Visual Effects Department designer Michaeljohn Harris and is accomplished in pen and paint with further hand drawn pencil sketch to the right and the measurement 18", it was utilised during the creation of the original prop which was built by effects assistant George Reed.

The artwork measures approximately 15" x 9" and remains in excellent production used condition with some light creasing and minor edge tears which have been carefully taped to the verso, overall fine.

A rare example of original concept artwork from one of the most highly regarded serials of this classic science fiction series.