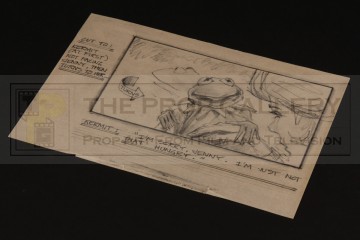 An original storyboard artwork used in the production of The Muppets Take Manhattan, the 1984 musical comedy directed by Frank Oz and produced by Henson Associates.

This original hand drawn storyboard artwork is accomplished in pencil on thick artists tracing paper and depicts Jenny (Juliana Donald) and Kermit the Frog as performed by Jim Henson. The artwork features notes relating to camera movement and Kermit's line below the illustration, any copies of this storyboard which were distributed to various production members would have originated from this hand drawn original.

The artwork measures approximately 8" x 5.5" and remains in excellent production used condition with some tape remains to the bottom, overall fine.

A rare and highly displayable artwork with excellent subject matter from the classic Muppet franchise.