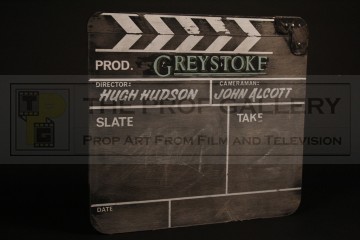 Greystoke: The Legend of Tarzan, Lord of the Apes

An original clapperboard used in the production of Greystoke: The Legend of Tarzan, Lord of the Apes, the 1984 picture directed by Hugh Hudson.

This production used traditional style black wooden clapperboard with hinged clap stick bears the movie title 'GREYSTOKE' in green painted letters in addition to the names of director Hugh Hudson and noted cinematographer John Alcott as cameraman. The clapperboard has spaces where the slate number, take number and date could be marked for reference during the production and exhibits signs of chalk residue, particularly to the verso.

A displayable example of the iconic clapperboard which clearly saw heavy use during the production of this well regarded Academy Award nominated picture.