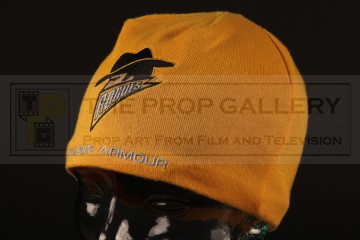 An original hat used in the production of The Dark Knight Rises, the 2012 superhero sequel starring Christian Bale as Batman under the direction of Christopher Nolan.

Beanie hats such as this can be seen worn by supporters of the Gotham Rogues at the football game. The yellow Under Armour branded headwear features a Rogues logo patch to the front and remains in excellent production used condition, very fine.