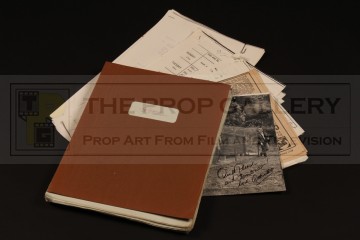 This original production used script comprises of 91 pages bound between front and rear covers of brown card with the front featuring a window cut out revealing the title of the movie to the interior cover page which is signed by assistant director Derek Whitehurst who utilised this script during the production. The script features numerous hand inscribed annotations throughout and is accompanied by a wealth of production materiel to include internal memos, totalling 19 pages, detailing casting, various annotated shooting schedules, four pages of hand written notes, two stills and a telegram from director Gabrielle Beaumont wishing Whitehurst a happy birthday.