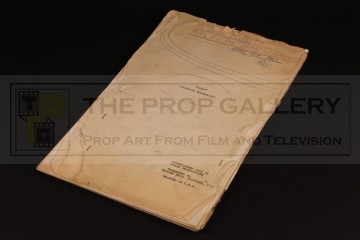 An original script from the production of Giant, the 1956 epic starring Elizabeth Taylor, Rock Hudson and James Dean in his final picture.

This original dialogue transcript was utilised by Warner Bros. during post production of the movie and comprises of 81 pages over 11 reels. The front cover of the script bears the title of the movie and is hand inscribed 'THIS SCRIPT MUST BE HELD BY PRINT CONTROL, WARNER-PATHE HOUSE' with an unidentified signature below and features various annotations throughout relating to the film print.

The script remains in fair vintage condition with the staples removed and exhibiting some folding, paper loss and toning to the front and rear covers, the main body of the script very good with minor edge wear.