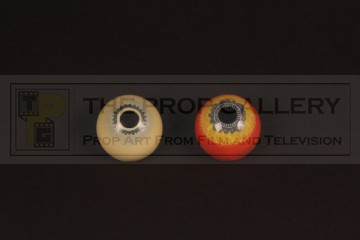 A pair of original Slimer eyes from the production of Ghostbusters, the 1984 science fiction comedy classic directed by Ivan Reitman.

These eyes were created during production at the Boss Films effects house started by noted former Industrial Light and Magic employee Richard Edlund for use on the Slimer puppet. Constructed of hard resin which has been hand painted and then coated in a further layer of clear resin to give the desired appearance the eyes feature holes to the back likely to allow them to be mounted on rods. These two differing eyes hail from the collection of Steve Johnson who was largely responsible for the creature effects on the picture.

Each of the eyes measure approximately 1" in diameter and remain in excellent condition, very fine.

A incredibly rare Slimer related artefact from this celebrated box office smash which was nominated for the Academy Award for Best Visual Effects.