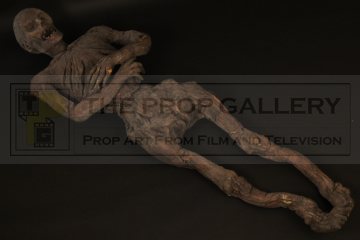 An original mummy used in the production of the 2001 documentary series Egypt's Golden Empire, a three part series which looked at the lives of the pharaohs.

This full scale mummy is one of three created by The Model Unit for the production, one basic mummy was sculpted and moulded and three identical casts pulled from the master mould. Each mummy was then cast in foam and latex cored with an aluminium armature so they could be posed and each one individualised by reshaping the heads into three expressions. The mummies were then accurately wrapped to be cut open on camera.

The mummy stands approximately 63" tall and remains in good production used condition with some minor latex loss in areas with some minor hardening to extremities such as the fingers but remains largely supple to the touch and can still be posed.