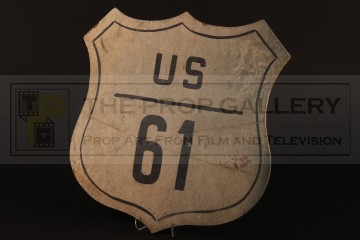 An original prop used in the production of The Fugitive Kind, the 1960 drama starring Marlon Brando under the direction of Sidney Lumet.

This U.S. Route 61 road sign was custom made by the production due to the picture which is set in the Deep South actually being filmed in New York, similar signs can be spotted at the beginning of the movie. Constructed from hardboard the shield shaped sign is entirely hand painted and has been hand inscribed to the verso with the name of the movie and a list of the principal cast and senior production members.

An extremely rare and displayable artefact from the production.