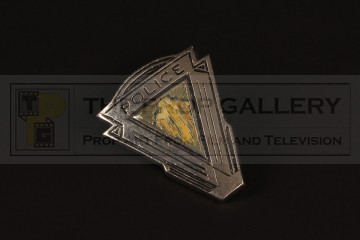 An original badge used in the production of The Flash, the 1990 superhero television series based on the DC Comics character starring John Wesley Shipp.

This badge was custom made by the production for use by the various Central City Police officers, this being the version seen worn on their caps. Constructed from cast metal the badge features the city emblem with 'POLICE' above, to the rear are two wires used to attach it to the caps.