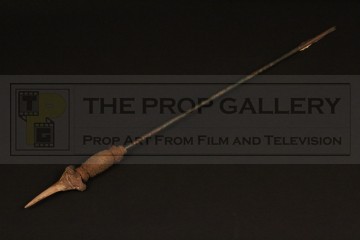 Flaming arrows such as this were used in the battle scenes during the production, constructed from wooden cane with a weathered green paint finish the arrow features an imitation shark tooth head of moulded rubber with an applied rag attached using wire.

The arrow measures approximately 29" long and remains in good production used condition with some of the rubber fletching missing to the end.