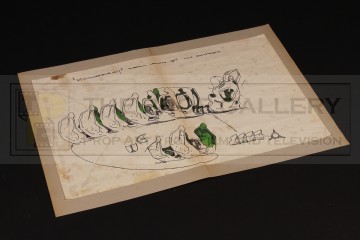 First Men in the Moon

An original concept artwork used in the production of First Men in the Moon, the 1964 science fiction picture starring Edward Judd, Martha Hyer and Lionel Jeffries based on the 1901 novel by H. G. Wells.

Special visual effects for the picture were provided by stop-motion animation legend Ray Harryhausen who worked alongside Les Bowie at his Slough studio to produce the complicated travelling matte sequences which combined live action footage with miniatures. This is the original hand drawn concept artwork for the mooncalf skeleton seen after the Selenites have removed the flesh, it was drawn by frequent Bowie collaborator Ian Scoones from the original mooncalf design by Harryhausen himself.

The highly detailed colour artwork is accomplished in black and green pen on paper and depicts the skeleton of the mooncalf with detailed sections of the cage and spine below, the work is hand inscribed "MOONBEAST, OVERALL LENGTH 25", IAN SCOONES' to the top in pen. From this concept design a miniature of the skeleton was constructed from plaster which was then combined with live action footage via travelling matte. This exact artwork can be seen featured on page 184 of the 2003 publication An Animated Life by Ray Harryhausen and Tony Dalton.

Following its use during the production the artwork was glued in one of the many scrapbooks created by Ian Scoones which documented his work. It was subsequently removed from the scrapbook, likely when it was photographed for Ray Harryhausen's book, but remains pasted to the pages with other partial entries still stuck to the verso. The artwork measures approximately 17.5" x 11" and remains in good vintage condition with some light staining due to age and storage.

This represents fine production artefact and an incredibly rare example of hand drawn concept artwork from this regarded Harryhausen work.