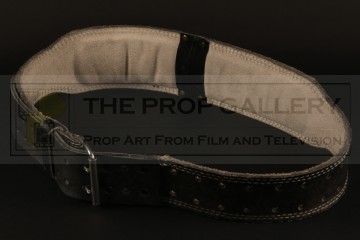 An original spacesuit belt used in the production of the 1997 science fiction horror Event Horizon.

Belts such as this can be seen worn by the various cast members as part of the spacesuits designed by John Mollo. Essentially a modified weightlifting belt to include and extension allowing it to reach around the suits it is hand inscribed 'WEIR' to the interior for the character portrayed by Sam Niell, likely a mistake by a member of the production crew as Weir is not seen wearing a spacesuit in the movie.

The belt remains in excellent condition with some minor soiling consistent with production use.