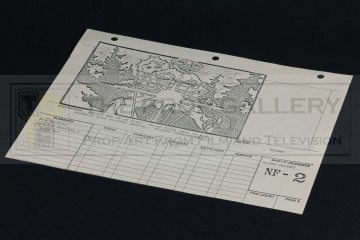 An original storyboard used in the production of E.T. the Extra-Terrestrial, the 1982 science fiction classic directed by Steven Spielberg.

This storyboard was created by and used at noted effects house Industrial Light & Magic during the production of the Academy Award winning visual effects sequences. The storyboard is printed on light blue paper and depicts an illustration from the the iconic sequence where E.T and Elliot fly on the bike with a description of the action taking place below, it also contains various information including visual effects elements require to produce the shot.

The storyboard measures 11" x 8.5" and remains in near perfect original condition, very fine.

A highly displayable example of original production material from this Academy Award winning blockbuster which became the highest grossing picture of all time.