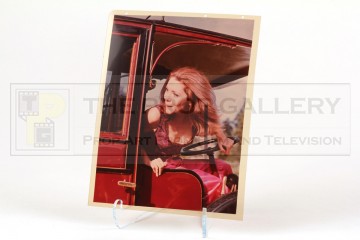 An original transparency from the production of The Avengers, the cult 1960s television series starring Patrick Macnee and Diana Rigg.

This is an original 4" x 5" large format transparency created by the studio during the production of the series. The transparency on heavyweight film shows Diana Rigg as Emma Peel in the climactic scene of the series five episode Escape in Time broadcast in January 1967, Rigg is photographed here from an angle not seen in the final cut of the episode, this is complete with its original outer sleeve which features some hand inscribed annotations.

The transparency measures 4" x 5" and remains in excellent vintage condition with some wear to the outer sleeve, generally fine.

A rare example of original material from the production of this classic television series.