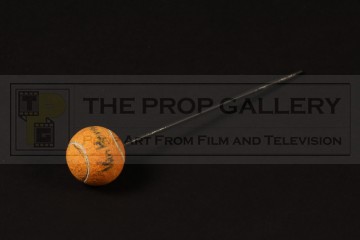 This miniature tennis ball was created by noted effects company Industrial Light & Magic (ILM) for the memorable supernatural tennis match sequence. The strange movements of the tennis ball being impossible to achieve practically meant that ILM were tasked with creating the tennis game in its entirely with the exception of some close up shots. Following a lot of work to determine the bounce points and trajectory of the balls ILM were able to programme the sequence in motion control with various scales of ball being photographed on a rig against black velvet and optically composited with the live action plates of the actors playing tennis with no ball.

This miniature tennis ball is hand sculpted with a slight furry texture and finished in orange paint with white grooves and features a hand inscribed Van Horne logo, it is placed on the end of a rod allowing it to be mounted on a rig for filming. The tennis ball measures approximately 1" in diameter with the total length including the rod being 5", it remains in good production used condition with some minor surface wear and smudging to the Van Horne logo, overall fine.