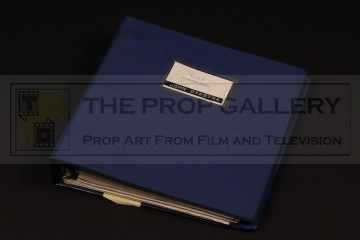 An original production binder used in the production of Dune, David Lynch's 1984 film adaptation based on the novel by Frank Herbert.

This breakdown binder was used during pre production by Apogee Inc who were originally contracted to provide the visual effects for the picture, this was the personal binder of effects pioneer John Dykstra who had previously won an Academy Award for his work on Star Wars before forming Apogee, his own visual effects company in the late 1970's, ultimately Apogee did not provide the effects for the picture and would pull out of the project altogether.

This binder contains Dykstra's entire breakdown of the visual effects sequences on individual shot analysis sheets, every single one of which is hand inscribed in pencil. These analysis sheets, totalling well in excess of 100, feature storyboard reductions which have been cut out and affixed to the pages with various information inscribed in Dykstra's hand to include scene numbers, detailed shot descriptions, effects elements, equipment, time and crew required and the stage or location each scene was to be shot. Numerous sheets have several or more storyboards applied with the information varying from sheet to sheet and the majority dated March and April 1983. Furthermore are some hand inscribed notes and unused breakdown sheets to the front of the folder and a further 15 analysis sheets to the rear which are noted as having been removed and the shots no longer required to be produced by Apogee. To the front of the binder is a plastic wallet containing a card which is type written 'DUNE, BREAKDOWN SHEETS' and an applied black tape below typed 'JOHN DYKSTRA', the binder is similarly labelled to the spine.

John Dykstra remains one of the true pioneers of visual effects as we know them today and this rare archive of material offers a great insight into the production process which Dykstra and Apogee were so heavily involved with before finally pulling out very close to the start of principal photography.

The binder and contents remain in generally excellent condition throughout with minor edge wear and handling from use during the production, overall very fine.

A unique and incredibly concise production artefact from the early days of this box office flop which later achieved cult status with science fiction fans.