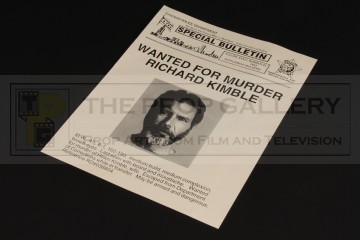 An original prop from the production of The Fugitive, the 1993 action thriller starring Harrison Ford under the direction of Andrew Davis.

Wanted posters such as this can be seen in various scenes of the movie as the Chicago Police Department hunt for Dr. Richard Kimble portrayed by Harrison Ford. The poster is printed on an off white medium paper stock and features the headline 'WANTED FOR MURDER RICHARD KIMBLE' with a mugshot of the character and details of his appearance below.

An instantly recognisable and highly displayable artefact from the production of this well received box office smash which was nominated for seven Academy Awards.