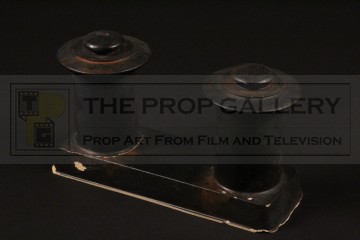 This miniature was created by Donald Pennington Inc who were tasked with constructing the large scale miniatures of the Titanic ship. Fairlead miniatures such as this were used to dress the large 1:8 scale mid ship to stern and 1:6 scale bridge to bow miniatures used prominently during filming. This detailed double fairlead miniature is cast in resin with a weathered paint finish and features holes to the flange where it would have been screwed to the deck. The bottom of the miniature is hand inscribed 'TITANIC 98' and is signed by Donald Pennington in black pen.

The miniature measures approximately 9.5" in length and stands 5.5" high, it remains in good production used condition with much of the flange missing from around the base, otherwise fine.