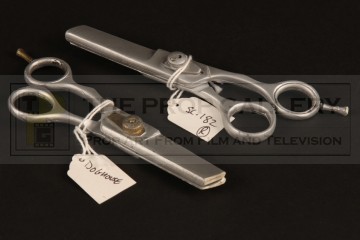 These special effects scissors were custom made by the production and used by Emily Booth as The Snipper for shots where the use of pointed scissors was unsuitable, notably as Patrick (Keith-Lee Castle) meets his bloody demise. The scissors are moulded from the hero metal prop in a partially flexible plastic like material with points removed and finished in silver paint, each feature tags with the title of the movie and scene number hand inscribed in pen. Emily Booth can be seen holding an identical pair of effects scissors in behind the scenes footage.