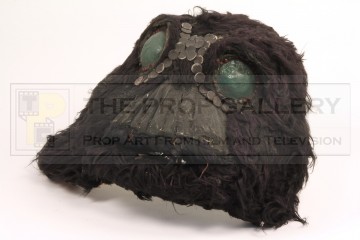 An original monster head used in the production of the long running BBC science fiction television series Doctor Who.

From the 1979 serial Nightmare of Eden starring Tom Baker as The Doctor this is the original special effects Mandrel head used on screen in the scene where the creature disintegrates towards the end of episode three. For this sequence the construction of a special effects head was required which was handled by BBC Visual Effects Department designer Colin Mapson and his assistant Chris Lawson. The Mandrel head is constructed from expanding foam and latex which has been dressed with fur, to the rear embedded in the foam are numerous hooks which once had nylon cord attached to implode the head on cue, this was operated by Lawson while Colin Mapson produced the smoke effects. Only one take of this effects sequence was ever filmed taking place at BBC Television Centre Studio 6 on August 27, 1979, this represents the only special effects Mandrel head constructed for filming. Following the successful shoot the body section was disposed of but the head was salvaged by Steve Cambden who was present during filming and served as an assistant K-9 operator under Nigel Brackley. Steve refurbished the prop adding a thin layer of fibreglass to the backless interior in order to support the cracked foam and retained it as a memento, the final photograph presented here was taken following filming in August 1979 before the prop was refurbished.

The Mandrel head measures approximately 27" wide and stands 20" high, it remains in good stable condition with some cracking to the foam which occurred during filming and largely lacking the mouth tendrils which were once present, otherwise fine.

Please note that due to its size this lot requires special shipping arrangements, we therefore recommend that any shipping queries, particularly those of an international nature, are discussed before purchasing.