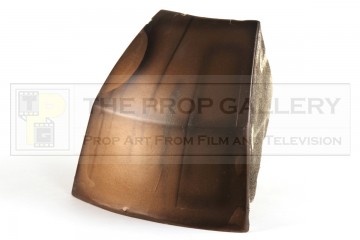 From the 2007 episode Evolution of the Daleks starring David Tennant as The Doctor this is an original dome used on one of the special effects Dalek props which were created for explosions, these comprised of sections which were glued together thus guaranteeing they would come to pieces as desired on cue. Constructed from fibreglass the dome section is backed with foam and features a high quality gold weathered paint finish, to the sides and top of the prop there is evidence of black bonding where it would have been attached to the next section of the dome.

The dome section measures approximately 7.5" long and remains in very good condition with some minor paint wear and chipping to the edges of the fibreglass which is to be expected given the nature of its use during the production.

A rare and displayable Dalek artefact from this cult science fiction series.