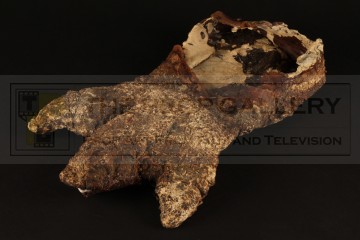 From the 1970 serial The Silurians starring Jon Pertwee as The Doctor this is an original Silurian creature foot. Constructed by the BBC VIsual Effects Department from latex rubber covered in a wood chip type substance to add detail and texture the foot measures approximately 14" long and remains in good vintage and screen used condition its age considered, the thick latex rubber being stable despite some hardening and cracking with some loss to the ankle and middle toe.

An extremely rare artefact from the Jon Pertwee era of this cult science fiction series.