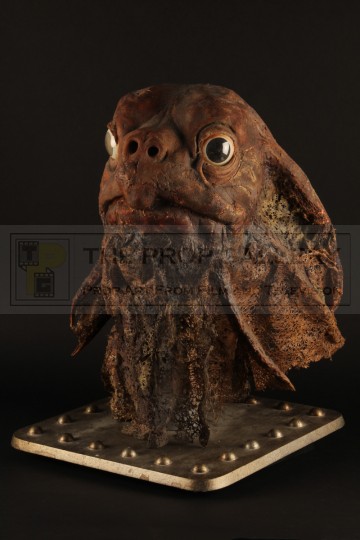 From the 1972 serial The Sea Devils starring Jon Pertwee as The Doctor this is one of the original Sea Devil masks created by the BBC Visual Effects Department. Constructed from latex on top of an under skull of fibreglass the distinctive mask features a number of fins dressed with web like mesh fabric, the piece was sympathetically restored and mounted on a custom display stand several years ago by former BBC Visual Effects Department designer Mike Tucker who touched up a number of areas and added replica eyes. This exact head can be seen in the famous publicity shots with Jon Pertwee.

The display measures approximately 13" x 13" and stands an impressive 18" high, it remains in very good screen used and vintage condition exhibiting some cracking to the latex which is generally very stable.

An extremely rare and highly displayable creature artefact from the Jon Pertwee era of this classic science fiction series.