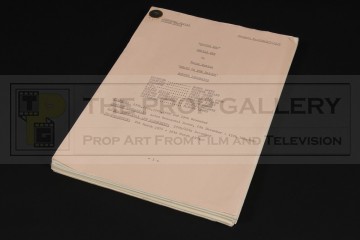 From the 1974 serial Death to the Daleks starring Jon Pertwee as The Doctor this is an original script for scenes filmed during the second recording which took place at BBC Television Centre Studio 4 on 17th & 18th December 1973 with the location filming having been completed the previous month, scenes from all four episodes are present however the majority of the content relates to episodes three and four. The script comprises of 98 white pages in addition to a pink cover which lists the title of the serial, production staff and filming dates, this bound by the original pin to the top corner.

The script remains in excellent production used condition exhibiting some minor edge wear from use and handling, otherwise very fine.

A very rare example of original production material from the Jon Pertwee era of this classic science fiction series.