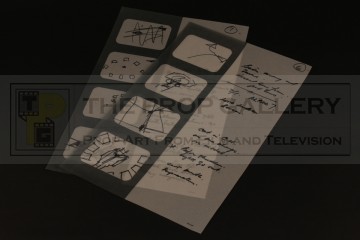 A pair of original storyboard artworks used in the production of the long running BBC science fiction television series Doctor Who.

From the 1969 serial The Space Pirates starring Patrick Troughton as The Doctor these are two pages of storyboard concept artwork created during the design of the visual effects sequences. The rough storyboard concepts were hand drawn by John Wood who served as a freelance effects designer for the story having previously worked for the BBC in the same capacity on earlier serials such as The Chase and The Celestial Toymaker. The artwork is accomplished in black pen on tracing paper and depicts a rough interpretation of the model effects work, entirely hand inscribed with corresponding notes.