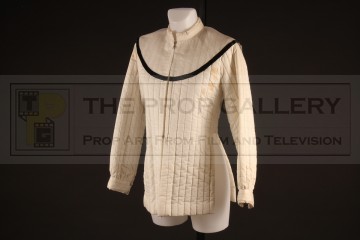 From the 1980 serial Meglos starring Tom Baker as The Doctor this costume was worn by Colette Gleeson as Tigellan Caris. The costume is one of two bespoke made for Gleeson by the BBC Wardrobe department and is constructed from white quilting with net detailing to the shoulder area. To the interior collar the costume features a material label which is hand inscribed 'COLETTE' in pen.

The costume remains in excellent production used condition with some minor staining to the chest and upper left arm, otherwise fine

A rare example of principal character costume from the Tom Baker era of this classic science fiction series.