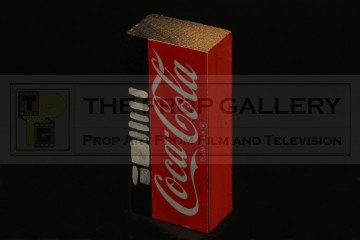 An original miniature from the production of Die Hard 2, the second instalment in the popular action franchise starring Bruce Willis as New York cop John McClane

This miniature Coca Cola vending machine was made by Apogee model maker Ferdinand Metz in 1:24 scale for use on the miniature airport set. Constructed from wood with a Coca Cola logo printed on plastic and hand painted the miniature features some glue residue to the base where it was fixed on set and is hand inscribed to the rear 'DIE HARD II, DIE HARDER' in pen.

A rare and displayable miniature artefact from this classic action franchise.