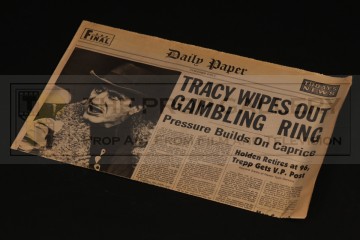 An original prop used in the production of Dick Tracy, the 1990 action comedy directed by Warren Beatty.

Newspapers such as this can be seen in the montage sequence as Dick Tracy (Warren Beatty) works to bring down Alphonse 'Big Boy' Caprice's (Al Pacino) crime gang. The custom printed Daily Paper newspaper features the headline 'TRACY WIPES OUT GAMBLING RING' with a large image of Al Pacino as the crime boss to the left, the interior of prop is made up of repeated text unrelated to the movie.

The newspaper measures approximately 23" x 17" when closed and remains in excellent folded condition with some edge wear and toning, generally fine.

A highly displayable artefact from this Academy Award winning picture.