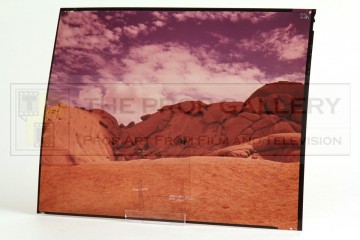 An original transparency from the production of 2001: A Space Odyssey, the 1968 epic science fiction masterpiece directed by Stanley Kubrick.

The Dawn of Man sequence is the now iconic introduction to 2001: A Space Odyssey which shows the progression of ape like primates and culminates in one of the most memorable match cuts in cinematic history. All of this was to be filmed against a backdrop of vast natural scenery and Kubrick had found a location with a unique beauty he felt was a perfect setting for his opening sequence, a remote area of the Namib Desert in Southwest Africa, now modern day Namibia. Filming on location in Southwest Africa was far from ideal for various reasons but with Kubrick adamant that he wanted to use the location and displeased at the possibility of painted backdrops it was decided that a small crew could be sent on location to shoot background plates which could be later combined with live action footage shot in studio.

Traditionally during this period this would be realised utilising rear projection where the background is projected behind the live action set up, this however would not produce footage of the quality demanded by Kubrick, particularly not on the gigantic scale required for the Dawn of Man sequence, and blue screen matting was also disregarded for the same reasons. It was therefore decided to use front projection to combine pre shot backgrounds with a live action studio performance in camera. The vision was to be able to shoot the live action performance on a set in front of a screen covered in Scotchlite material onto which the background plate could be projected thus providing the desired shot. Tests using the largest format available, 4” x 5” Ektachrome transparencies proved mediocre with the ambitious Kubrick declaring that an 8” x 10” transparency would be perfect once projected, the fact that no projector large enough to accomplish this feat currently existed was not enough to put him off so while a small unit was sent to the South West Africa location selected by Kubrick work commenced on building a front projection rig capable of projecting 8" x 10" transparencies. With this achieved the Dawn of Man sequence was shot on stage three at the MGM British studios in Borehamwood by John Alcott under the direction of Stanley Kubrick.

This is one of the original 8" x 10" transparencies shot on location in Africa during the production and features a desert scene with a production markings visible on the ground, this was gifted to a charity auction by producer Jan Harlan on behalf of the Stanley Kubrick estate and is accompanied by a copy of a letter stating this. The transparency survives in excellent and undamaged condition with only small pinholes to the corners from use during production, it represents a fine example of the groundbreaking front projection technique employed on this revered science fiction picture.

An incredibly rare example of original production material from this Academy Award winning science fiction classic which remains one of the most influential pictures in the history of cinema.