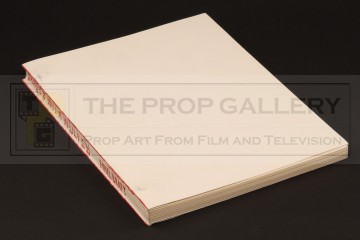 An original script used in the production of Dances With Wolves, the 1990 epic directed by Kevin Costner.

This original production used script is dated May 23, 1989 and comprises of 132 photocopied pages bound between front and rear covers of white card with the spine hand inscribed 'DANCES WITH WOLVES, FINAL DRAFT' in red pen. The script remains in excellent production used condition throughout with some minor edge and cover wear, overall fine.

A rare example of original production material from this highly regarded box office smash which was the recipient of seven Academy Awards.