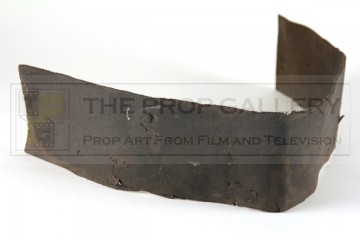 An original Dalek section used in the production of the long running science fiction television series Doctor Who.

From the 1988 serial Remembrance of the Daleks this shoulder band was fitted to the oldest of the Dalek props in order to match the newer ones created by the BBC Visual Effects Department. The Dalek prop to which this was fitted has a notable history and was a long serving original dating back to the 1960s with the shoulder section being one of the first four produced by Shawcraft Models in 1963 and the skirt dating back to the 1965 serial The Chase with these components having been used in almost every Dalek story and appearing opposite every incarnation of The Doctor.

Following its final appearance in Remembrance of the Daleks a large section was removed from the rear of the prop when it became an attraction at the Museum of Moving Image (MOMI) exhibition in London where people could sit inside and pretend to be a Dalek, it then became one of the star attractions at the Dapol Doctor Who Experience in Llangollen and later at the Blackpool exhibition until its closure in 2009. In 2010 the prop was auctioned by Bonhams and purchased by The Prop Gallery, we were able to reunite the missing back sections which remained in screen used condition having fortunately been retained and auctioned off some years earlier, the prop was then restored to its former glory by former BBC Visual Effects designer Mike Tucker and his team at The Model Unit.

A rare and affordable example of an original Dalek part from this cult science fiction series accompanied by exceptional provenance.