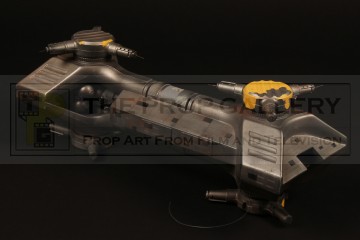 An original miniature used in the production of the long running BBC science fiction television series Doctor Who.

From the 1988 25th anniversary serial Silver Nemesis this is the original Cyberman war ship miniature seen on screen in the episode two cliffhanger and again in episode three. The craft was designed and built by Paul McGuinness of the BBC Visual Effects Department and despite on screen appearance is the only miniature of its kind ever made, it was photographed andthen processed by Jim McCarthy in Paintbox, a primitive version of CGI as we know it today, which although was not capable of generating images was able to resize and duplicate them allowing the creation of an entire fleet using only a single miniature.

The miniature is constructed from various materials including resin, plastic and kit parts, it features front and rear pods connected by a main body with weapons turrets to the top and bottom and is highly detailed with a weathered hand painted finish. The miniature features three mounting points to the main body with some fishing line still present from use during the production.

The unique miniature measures approximately 16" in length and sits 6" high, it remains in excellent screen used condition with some minor paint loss, most notably to one of the weapons turrets, otherwise very fine.

This represents an incredibly rare and highly displayable example of an original filming miniature from this classic science fiction series.