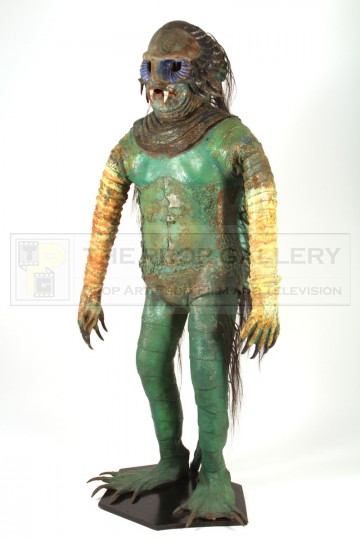 An original costume used in the production of Space: 1999, the cult science fiction television series produced by Gerry and Sylvia Anderson.

This creature costume was custom made for the production and makes several appearances throughout Year two of the series as Maya (Catherine Schell) transformations. It can be seen in New Adam New Eve, The A B Chrysalis, Seed of Destruction, The Beta Cloud and The Bringers of Wonder where it was worn by Albin Pahernik, for its final appearance it was worn by stunt performer Roy Scammell in The Dorcons.

The three piece creature costume is constructed from material backed rubber and comprises of head, body section and legs. The costume was repainted and redressed several times throughout the series appearing slightly different each time, for its appearance in The A B Chrysalis and The Beta Cloud this costume was partnered by a different head, the remainder of the time this head was redressed with latex appliances. Following its use in the series the costume was displayed at the Space City exhibition in Blackpool where it was mounted on a wooden stand, it remains on this today.

A rare example of original wardrobe from this acclaimed science fiction series.