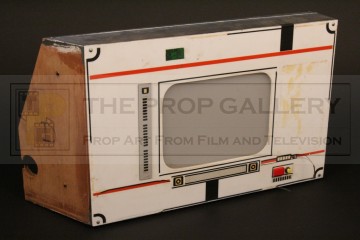 An original panel from the 1977 Jif Dessert Toppings advert which was inspired by Thunderbirds and was produced by creator Gerry Anderson. Many of the team who did the model effects work for Space: 1999 were involved in the production of this advert.

This panel is constructed from plywood with an acrylic front which has been detailed with a variety of applied stickers and further plastic panelling. There is the facility to light the prop from behind giving the appearance which is ultimately seen in the advert.

The piece measures 22.5" x 8" overall with the main panel face measuring 18" x 12", the prop displays some wear from use and storage but remains in good displayable condition.