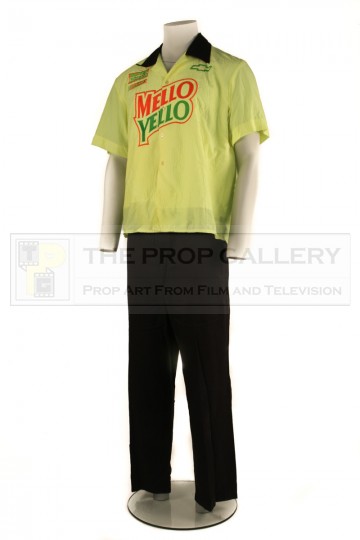 An original costume used in the production of Days of Thunder, the 1990 sports drama starring Tom Cruise under the direction of Tony Scott.

These costumes can be seen worn by the members of Cole's (Tom Cruise) racing team in the climactic sequence of the picture. The two piece costume comprises of a fluorescent yellow shirt and black trousers with the former featuring a large Mellow Yellow sponsorship logo to the front and back, additional patches to the front feature the Winston, NASCAR and Chevrolet logos. The label to the interior collar of the shirt is hand inscribed 'STEPHEN AYERS' for Stephen Michael Ayers, a credited member of Cole's team with the trousers similarly inscribed 'S. AYERS' to the waistband.

The costume remains in generally excellent production used condition throughout.

An instantly recognisable example of original wardrobe from this well received picture.